•A fetus is a developing mammal after the embryonic stage and before birth.

•In humans, the fetal stage of prenatal development starts at the beginning of the 11th week in gestational age, which is the 9th week after fertilization.

•At the start of the fetal stage, the fetus is typically about 30 mm in length from crown to rump, and weighs about 8 grams.

•The head makes up nearly half of the fetus’ size.

•Breathing-like movement of the fetus is necessary for stimulation of lung development, rather than for obtaining oxygen.

•The heart, hands, feet, brain and other organs are present, but are only at the beginning of development and have minimal operation.

•Fetuses are not capable of feeling pain at the beginning of the fetal stage, and may not be able to feel pain until the third trimester.

•At this point in development, uncontrolled movements and twitches occur as muscles, the brain and pathways begin to develop.

•The amount of body fat rapidly increases. Lungs are not fully mature. •Thalamic brain connections, which mediate sensory input, form. •Bones are fully developed, but are still soft and pliable.

•Fingernails reach the end of the fingertips. The lanugo begins to disappear, until it is gone except on the upper arms and shoulders.

•Birth ccurs around the 40th week, but the fetus is considered full-term between wks 37 and 40- it is sufficiently developed for life outside.

•Control of movement is limited at birth, and purposeful voluntary movements develop all the way until puberty.

•There is much variation in the growth of the fetus. factors affecting fetal growth can be:

and hormone output. Female fetuses tend to weigh less than males at term.

•Viability refers to a point in fetal development at which the fetus may survive outside the womb.

•There is no sharp limit of development at which a fetus automatically becomes viable.

•It is rare for a baby weighing less than 500 gm to survive.

•When such babies are born, the main causes of perinatal mortality is that the respiratory system and the CNS are not completely differentiated.

•If given expert postnatal care, some fetuses weighing less than 500 gm may survive, and are referred to as extremely low birth weight or immature infants.

•Preterm birth is the most common cause of perinatal mortality, causing almost 30% of neonatal deaths.

• Allows for normal development of the respiratory tract, gastrointestinal tract, and musculoskeletal system

Postnatal development: Circulatory System •The circulatory system of fetus works differently from that of born humans; the

lungs are not in use: the fetus obtains O2 and nutrients from the mother through the placenta and the umbilical cord.

•while the other half enters the liver proper from the inferior border of the liver. The branch of the umbilical vein that supplies the right lobe of the liver first joins with the portal vein. The blood then moves to the right atrium of the heart.

•There is an opening between the RA and LA, Foramen ovale, and most of the blood flows from the RA into the LA, thus bypassing pulmonary circulation.

•The majority of blood flow is into the LV from where it is pumped through the aorta into the body.

•Some of the blood moves from the aorta through the internal iliac arteries to the umbilical arteries, and re-enters the placenta, where CO2 and other waste products from the fetus are taken up and enter the mother’s circulation.

•Some of the blood from the RA does not enter the LA, but enters the RV and is pumped into the pulmonary artery.

•There is a special connection between the pulmonary artery and the aorta, called the ductus arteriosus, which directs most of this blood away from the lungs.

•When the infant takes first breath after birth, the system changes suddenly. The pulmonary resistance is dramatically reduced.

•More blood moves from the RA to the RV and into the pulmonary arteries, and less flows through the foramen ovale to the LA.

•The blood from the lungs travels through the pulmonary veins to the LA, increasing the pressure there. The decreased right atrial pressure and the increased left atrial pressure pushes the septum primum against the septum secundum, closing the foramen ovale, which now becomes the fossa ovalis.

•This completes the separation of the circulatory system into two halves, the left and the right.

•The ductus arteriosus normally closes off within 1-2 days of birth, leaving behind the ligamentum arteriosum.

•Fetal hemoglobin enhances the fetus’ ability to draw O2 from the placenta. Its dissociation curve to O2 is shifted to the left, meaning that it will take up O2 at a lower concentration than adult hemoglobin will.

•This enables fetal hemoglobin to absorb O2 from adult hemoglobin in the placenta, which has a lower pO2 than at the lungs.

• Gas exchange occurs in the placenta

Flow of blood facilitated by shunts:

• Ductus venosus –diverts blood coming from the placenta away from liver

SEQUENCE OF EVENTS AT BIRTH

Sudden Pressure Drop Right side of the heart

100mls blood gushes through ductus venosus Into the right atrium

Blood now returns to right atrium, flows through each valve to the lungs and the left vetricle and its pumped out to the

body from the left ventricle “in series” circulation.

The pressure changes cause D.A to collapse and close in 24 -48Hrs.

– No need for thermoregulation 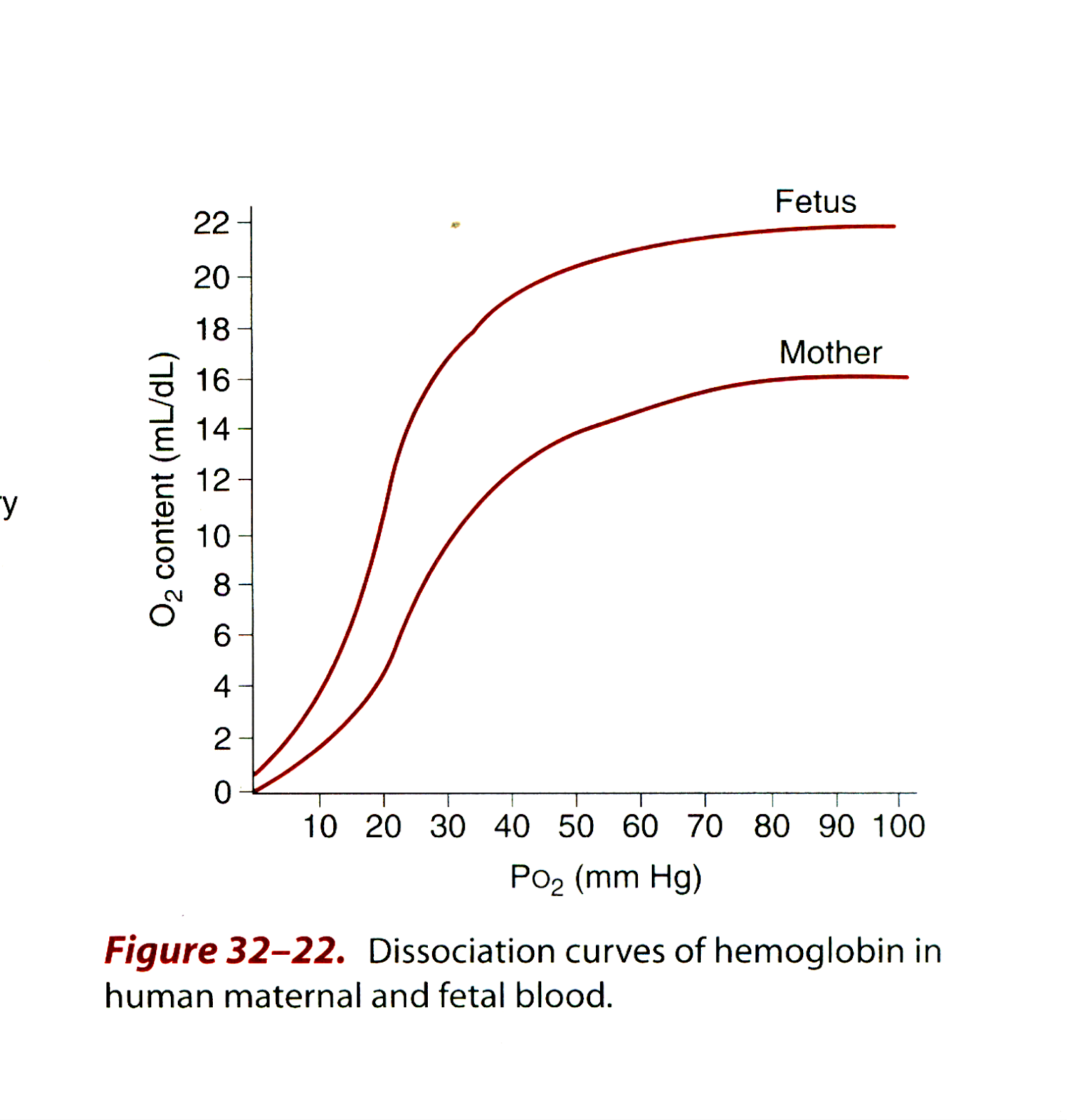 The P50 is higher for a right shifted curve.

A right shift can be caused by an increase in:

CO2 in the blood.

•This accounts for the feeling of shortness of breath, dyspnea, or heightened awareness of the need to breathe reported by many pregnant women. The pregnant woman is

actually forced to hyperventilate, and “blow off” more CO2 than she normally would.

•As a result, the removal of CO2 from the fetus’s bloodstream is facilitated!

•In a blood gas analysis, the normal nonpregnant woman would be expected to have a pCO2 of 35-45 mmHg

•Whereas the normal pregnant woman would be expected to have a pCO2 of 27-32 mmHg. 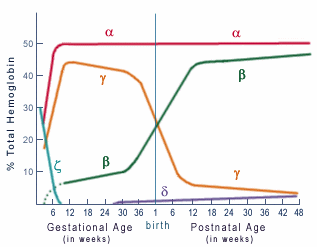 •βchains –chromosome 11 •Gamma and delta continue to be formed

•Glucocorticoids mediate the irreversible switch from fetal to adult HGB

•Spina bifida (“split spine”) is a developmental congenital disorder caused by the incomplete closing of the embryonic neural tube. 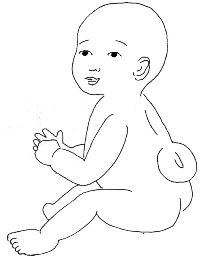 Some vertebrae overlying the spinal cord are not fully formed and remain unfused and open.

in response to hypoxia (AVP) • Liver : enzymes increase with GA

• Research in several species has established the quantitative importance of glucose as a fetal and placental nutrient.

• The quantity of glucose delivered into the umbilical circulation is less than the quantity taken up from the uterine circulation;

• fetal heart utilizes mainly glucose and lactate . This is in sharp contrast to the adult heart for which FA and AA are the most important metabolic fuels.

•Although considerable effort has been directed towards defining nutrient requirements of animals over the past 30 y, suboptimal nutrition during gestation remains a significant problem for many animal species.

•Despite advanced prenatal care for mothers and fetuses, ∼5% of human infants born in the U.S. suffer from intrauterine growth retardation

•Over the past decade, compelling epidemiological studies have linked IUGR with the etiology of many chronic diseases in adult humans and animals.

•These intriguing findings have prompted extensive animal studies to identify the biochemical basis for nutritional programming of fetal development and its long-term health consequences.

Urinary system • Pronephros, mesonephros then metanephros. • Pro and mesonephros degenerate by 11-12 w • Failure to form or regress result in anomalies

• Kidneys :Not essential for survival in utero,

• Impotant in contol in composition and volume of amniotic fluid

• At birth only 15% of adult alveoli are present,lungs continue to grow up to 8 years

• It covers the alveolar surface and reduces the surface tension so that, following birth, the alveoli do not collapse during the expiration.

• At birth,with first breath, an air to tissue interface is produced in the alveolus. Surfactant uncoils from lammeller bodies and then spreads to line alveolus to prevent collapse during expiration

SUMMARY OF FETAL ADAPTATIONS AND ADJUSTMENTS AT

From HBF to HbA

Congenital anomalies are anomalies that are acquired before birth.

•Patent ductus arteriosus, where the ductus does not properly close, drugs that inhibit prostaglandin synthesis can be used to encourage its closure, so that surgery can be avoided.

•Early symptoms are uncommon, but in the first year of life include increased work of breathing and poor weight gain. With age, the PDA may lead to congestive heart failure if left uncorrected.

•A developing fetus is highly susceptible to anomalies in its growth and metabolism, increasing the risk of birth defects. Diet is especially important in the early stages of development. Studies show that supplementation of the woman’s diet with folic acid reduces the risk of spina bifida and other neural tube defects.

•Another dietary concern is whether the woman eats breakfast. Skipping breakfast could lead to extended periods of lower than normal nutrients in the woman’s blood, leading to a higher risk of prematurity, or other birth defects in the fetus.

•During this time alcohol consumption may increase the risk of the development of Fetal alcohol syndrome, a condition leading to mental retardation in some infants.

•Smoking during pregnancy may also lead to reduced birth weight. Low birth weight is defined as 2500 g. Such infants tend to have a higher risk of secondary medical problems.

Crash training for teachers to be rolled out next week

KEREREMBE: Kenyans react to Bahati and Kansoul’s new song. What do you think about it?

Blue Ivy won an award at the NAACP Image Awards

Alikiba on the spot light after being exposed on h

Was Covid-19 death toll number given by China the

With more cases of Covid-19 in Kenya, now the city

Another end of the world failed prophesy. https:/

After leaving for another woman a man now wants hi

By  HuruMedia Staff
× Kindly share news and videos with us.